It is weird, it is not normal: Pep Guardiola on Manchester City's win 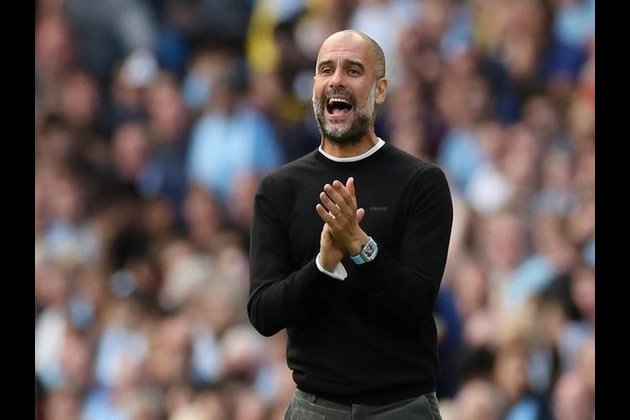 Leeds [UK], Sept 22 (ANI): After thrashing Watford FC 8-0 in the ongoing Premier League, Manchester City coach Pep Guardiola termed the win as weird and said it is not normal.

"It is weird, it is not normal. Five shots, five goals. In the same time, we gave them two chances to score. The quality we have is a joy to watch. After 5-0 the game is completely different. We were ruthless in terms of five shots, five goals," Goal.com quoted Guardiola as saying.

"Sometimes you shoot 15 times or 20 and can't do it. It was a lovely day for all of us, for our City fans in the sunshine and a lot of goals," he added.

The side was then handed a penalty in the seventh minute and Sergio Aguero registered his 100th goal for the team, giving Manchester City a lead of 2-0.

City's Riyad Mahrez was fouled by Watford goalkeeper Ben Foster and as a result, a penalty was awarded to Manchester City.

After scoring the goal, Aguero became the first-ever player in the history of Premier League to score goals in the opening six matches of the tournament.

Riyad Mahrez, Bernando Silva and Nicolas Otamendi also registered goals to give the team a 5-0 lead just in the 18th minute of the match, making it the fastest 5-0 lead during a match in the history of the tournament.

"The best way to humiliate the players is to do stupid things in the second half, make some fashion movements. We play for the spectators, who come here to watch the game. I would not like to see my team in the second half not run much because we are winning 5-0. That is a lack of respect for our opponents," Guardiola said.

As soon as the second half started, Bernando Silva registered his second goal of the match to give the team a 6-0 lead in the 49th minute of the match.

In the 60th minute, Bernando completed his hattrick as he scored the seventh goal for the team.

Kevin De Bruyne scored the eighth goal for City in the 85th minute. No more goals were scored in the match thereafter and Manchester City ended up winning the clash 8-0.

City is currently placed at the second position in the tournament standings whereas Watford is positioned at the 20th position.

Manchester City will next take on Everton whereas Watford will face Wolves FC on September 28. (ANI)