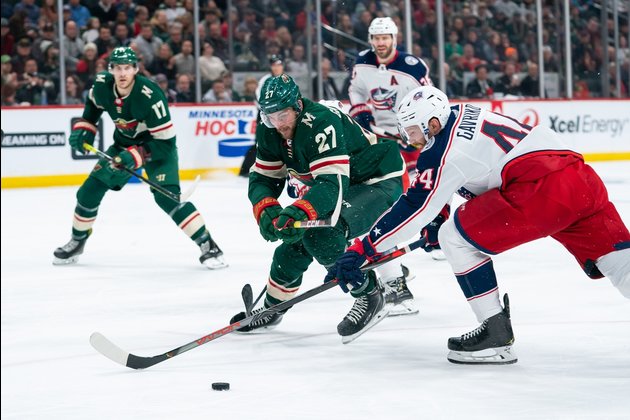 Eric Staal, Ryan Donato and Kevin Fiala each had a goal and an assist for the Wild, who improved to 10-5-1 in their past 16 games to inch closer to the second and final wild-card playoff berth in the Western Conference.

Nick Foligno, Emil Bemstrom, Pierre-Luc Dubois and Zach Werenski scored for the Blue Jackets, who dropped to 1-4-5 in their past 10 games. Columbus had snapped an eight-game losing streak with a 4-3 overtime victory against the visiting Ottawa Senators on Monday.

Columbus goaltender Matiss Kivlenieks, recalled on an emergency basis from Cleveland of the American Hockey League after Elvis Merzlikins was injured in a collision against the Senators, stopped 35 of 40 shots in just his fifth NHL game.

Joonas Korpisalo, who relieved Merzikins on Monday in his first appearance since sustaining a knee injury Dec. 29 that required surgery, was expected to start against the Wild. However, the Blue Jackets announced they didn't want to push him in what would have been his third game in four days after also making an appearance Saturday in the AHL.

Koivu scored the only two goals of the second period to give the Wild a 4-1 lead.

The first came at 12:08, after the Wild stole a clearance attempt by Kivlenieks from behind the Columbus net. Ryan Hartman's pass out front deflected off a defenseman's skate and right to Koivu, who put a one-timer into the net.

Koivu's second goal of the period came at 19:49 as he set up in front of the net and put a rebound off Ryan Donato's shot past Kivlenieks with a backhander.

The Blue Jackets pulled within 4-3 on goals by Bemstrom and Dubois in the opening 3:16 of the third, but Fiala scored midway through the period to restore the Wild's two-goal advantage.