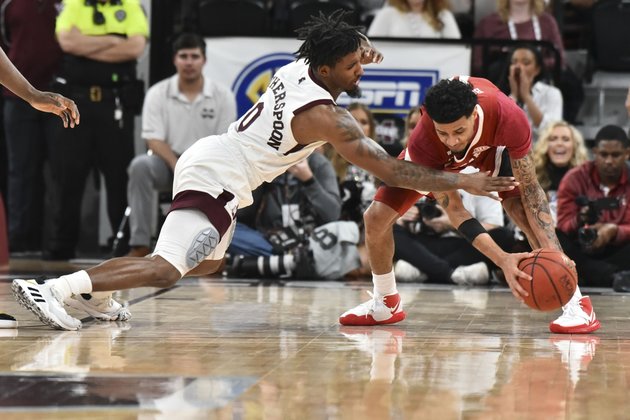 Sophomore Reggie Perry posted his 15th double-double of the season and 24th of his career to lead Mississippi State past Alabama 80-73 Wednesday night in Starkville, Miss., in a matchup featuring a pair of mid-pack Southeastern Conferences teams battling to get in the conversation for an at-large NCAA Tournament bid.

The 6-foot-10 forward scored 21 points and snagged 12 rebounds as the Bulldogs (18-10, 9-6) won for the third time in their last four games. He was a big reason the Bulldogs enjoyed a 42-30 scoring advantage in the paint.

Tyson Carter (19 points) and Robert Woodard II (10) also were in double figures for the Bulldogs. Carter hit two free throws with 17.8 seconds left and Perry one with 8.2 seconds remaining to seal the win.

Kira Lewis Jr. scored 29 points and added seven rebounds and four assists to lead the short-handed Crimson Tide (15-13, 7-8), who went cold from 3-point range in the second half (3 of 15) without their second-leading scorer, John Petty Jr.

Petty (15.3 ppg) injured his right arm in a scramble with Mississippi State's Abdul Ado for a loose ball and left the game for good with 7:34 left in the first half. Alabama trailed 28-27 at the time and trailed at the halftime break 41-39.

Jaden Shackelford had 17 points and Beetle Bolden 11 for the Tide.

The Bulldogs stretched their halftime lead to 53-45 in less than four minutes of the second period, but the Tide worked their way back to within 55-53 over the next four minutes.

Alabama knotted the game at 59-59 despite missing 11 consecutive 3-pointers at one point before Perry hit his only 3-pointer to ignite a 5-0 spurt and put Mississippi State up 64-59 with 8:20 to play. The Tide got within 77-73 in the closing seconds before the Bulldogs held on.