Should 'Faithless Electors' in US Presidential Polls Be Punished 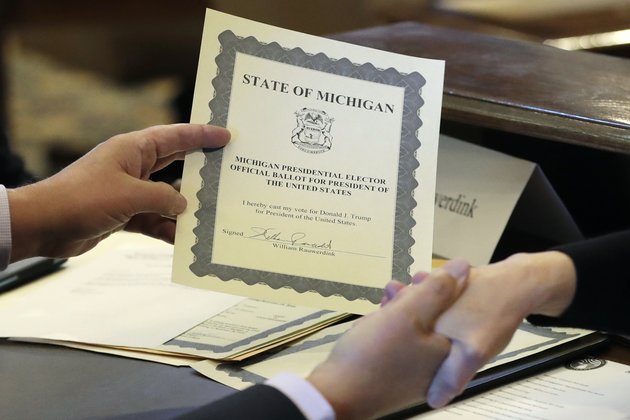 WASHINGTON - In November 2016, shortly after Donald Trump was declared the winner of the U.S. presidential election, a handful of Democratic members of the Electoral College concocted a wild scheme to head off Trump's entry to the White House.

The effort was rife with intrigue, as two Democratic electors, from Washington state and Colorado, sought to recruit other Democratic and Republican electors from around the country to deny Trump the minimum 270 votes he needed to claim the presidency. In order to do this, those rebels needed to persuade other presidential electors to vote contrary to the popular will of their home states.

The endeavor floundered. Now, nearly four years later and just months ahead of another contentious election featuring Trump, the U.S. Supreme Court is weighing whether such "faithless" members of the Electoral College can vote as they wish and whether states can punish them if they refuse to support the winning ticket in their states.

The United States has an indirect presidential election system. When Americans cast their ballots for a presidential candidate, they are in fact electing members of the Electoral College, the arcane body that formally elects the president.

The Electoral College has 538 members, corresponding to the number of senators and representatives from all 50 states plus three from the District of Columbia. They meet in their state capitals several weeks after the election to elect the president. To win the election, a candidate needs at least 270 electoral votes.

Although picked from the ranks of party loyalists, members of the Electoral College have occasionally gone rogue, breaking their pledge to vote for the winning ticket in their states. They're known as "faithless electors."

With no Republican elector willing to support Clinton, Chiafalo and Baca figured the only way they could stop Trump was to persuade other electors to write in a vote for a "compromise candidate" such as former Secretary of State Colin Powell. Alternatively, if enough Republicans defected, the election would go to the House of Representatives to determine.

Not a single Republican elector embraced their cause. But when Chiafalo and two fellow Democratic electors in Washington state voted for Powell, the state fined each $1,000. In Baca's case, he was removed before he could cast his vote for another Republican candidate.

The two Democratic activists then sued their states for disciplining them, setting off a legal chain reaction that ended up before the Supreme Court this year. Last week, the court heard oral arguments by lawyers representing the electors and their states. A decision is expected by summer.

The questions before the justices boil down to this: Are electors "free agents" allowed to vote their minds, or are they "proxies" for the popular will? And can states punish them if they go against the wishes of the voters?

At the moment, 32 states, including Washington state and Colorado, as well as the District of Columbia, require electors to vote for the winning presidential ticket. The rest rely on party loyalty to ensure their electoral votes go the winner of the popular vote in their states.

Lawyers for Washington state and Colorado say that the Constitution gives states the power to both appoint and remove the electors. For example, they say, they can remove an elector who has been bribed to vote for a certain candidate.

"It's the role of the states to oversee confidence in our election systems, to ensure the public's voice is heard," Colorado Attorney General Philip Weiser told the court last week.

What's more, they say, allowing electors to vote as they wish could lead to chaos in presidential elections.

"The chaos that would result from [siding with the electors] could occasion a constitutional crisis," Weiser said.

Dismissing fears about chaos, the electors argue that the Electoral College was created precisely to give its members the ability to pick the best candidate in their judgment. While states have the power to appoint electors, they can't use them as mere rubber stamps, they say.

"Given the current system of presidential selection by an Electoral College, there must be times when electors and only those electors are best placed to act in the interest of the country," said Jason Harrow of Equal Citizens, who argued on behalf of Baca and other electors.

For example, electors must have the ability to change their pledged votes in case a candidate dies or is found to have engaged in fraud or bribery, Harrow said.

"If something goes awry in this coming election or any other, the framers thought that electors could vote with discretion," Harrow said.

This is the first time in nearly 70 years that the Supreme Court has taken up the question of faithless electors. In 1952, the court ruled that a state can require electors to take a pledge, but it left unanswered the question of whether it can enforce the pledge.

This is not the kind of ideological issue that often divides the court between its five conservatives and four liberals. While questioning state control of electors, several justices voiced concern about crises in close presidential elections.

"Just being realistic, judges are going to be worried about chaos," conservative Justice Brett Kavanaugh said.

But lawyers for Chiafalo and Baca countered that the prospect of electors jumping ship and throwing an election into chaos is slim. Electors are picked among party loyalists.

Historically, faithless voting has been a rarity: In more than two centuries, only 100 or so electors have defected, and they have never changed the outcome of a presidential election.

James Gardner, a professor of law at State University of New York at Buffalo, said that even if the court sides with the electors, their parties will find other ways to keep them on a tight leash.

"The main method of enforcement has historically been exercised not even by the state, but by the political parties," Gardner said. "If you want to have a future in your own political party, you better not deviate from voting for the party's nominee."

As for Chiafalo, he says that a favorable Supreme Court ruling could enable electors to overturn a second Trump victory. But couldn't it go the other way, with Democratic electors switching sides if former Vice President Joe Biden wins, Chiafalo was asked during a recent interview on his group's Facebook page?

"That totally could happen but unfortunately that's the system our Founding Fathers created," Chiafalo responded.