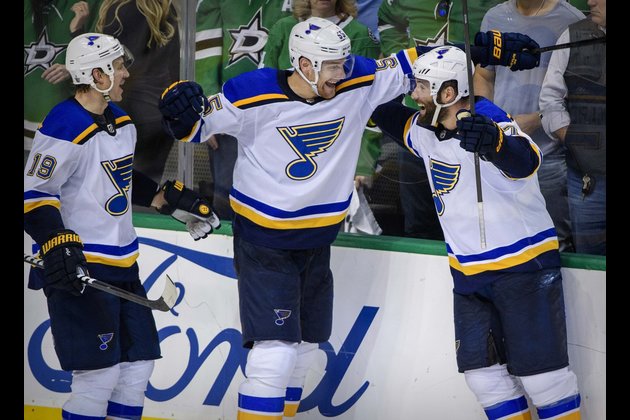 Parayko and Thomas won the first game 3-1 and the second 4-3, before the Canadiens got on the board with a 10-6 victory in 3-on-3 play to end the day.

No standings are being compiled, as the games are designed strictly for entertainment with the NHL season shut down due to the coronavirus pandemic.

In connection with the event, the National Hockey League Foundation and Electronic Arts are donating $100,000 to the CDC Foundation's COVID-19 relief efforts.

Parayko and Thomas opened up a 2-0 lead in the first game Saturday, then took a 3-1 lead early in the second period with virtual David Perron's second tally. They held the Montreal duo scoreless the rest of the way to clinch the first win.

The second game featured a flurry early, with three goals in a span of just 1:26 on the virtual clock. After the Blues took a 1-0 lead with 18:25 to play in the first, the Canadiens scored exactly a minute later and again at 16:59. But the Blues scored the next three goals, with Vince Dunn's tally with 2:42 left in the second period proving to be the winner.

The third game was played in the "Threes" format, with 3-on-3 action and goals doubling and then tripling in value as time continues. Mete and Suzuki fired out to a 6-0 lead but let the Blues storm back to take their own advantage. Montreal recovered, though, closing it out with the final few goals.

"'Threes' definitely wasn't our game, though, but we'll take the 5-on-5 wins," Parayko said with a laugh afterward."

"Yeah, where it counts," Thomas added with a smile.